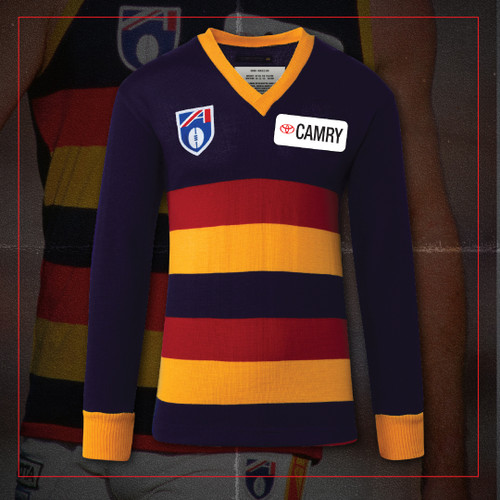 The Vintage Football Jumper Company, in conjunction with Woolmark and the Adelaide Football Club, is proud to release a series of retrospective vintage jumpers 'The Heritage Collection'.

This famous retrospective reproduction Adelaide Crows woollen jumper as worn during the Club’s inaugural 1991 AFL season is an iconic piece of Crows history.  2021 celebrates 30 years since Adelaide’s first game to the national competition when they hosted eventual 1991 premier Hawthorn on Friday, 22 March at their then home ground, Football Park in front of 44,902 fans. The ‘new kid on the block’ was thrown into the deep end of the pool for Round One of the 1991 season. The Crows had just three players with VFL/AFL experience and were pitted against Hawthorn, which had made six grand finals and won four flags in the past seven seasons. The Crows defeated the eventual premiers by a massive 86-point margin, winning 24.11 (155) to 9.15 (69). The landslide win over the league heavyweights sent shockwaves across the competition and announced the arrival of South Australian football on the country’s biggest stage, despite the stiff opposition, Adelaide’s AFL journey began in fairy tale fashion.

This rare jumper features a reproduction Toyota Camry sponsorship woven patch, a commemorative historical patch featuring the 1st game scores, players and match details,  the original AFL logo woven patch as worn in period and the merino wool in this guernsey was grown by sheep grazing the Australian landscape, cared for by Australian farmers, and shorn and manufactured here in Australia. The jumper manufactured under official license by the Australia Football League features a traditional V-neck collar design is a must-have for any Crows discerning collector.